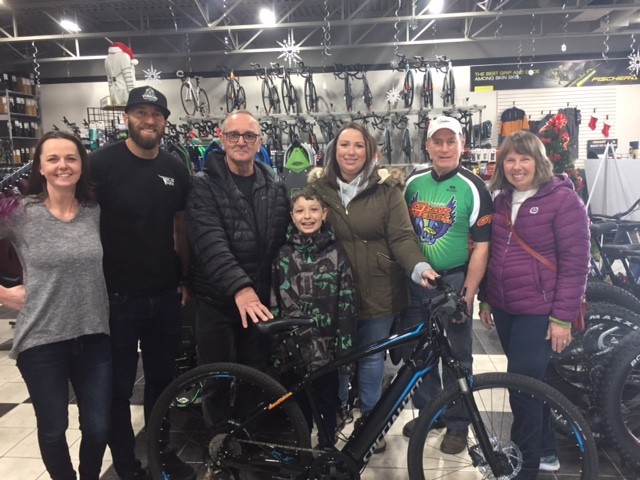 Norm Mathurin of Renfrew had the winning ticket, purchased for a Father's Day present by daughter Katarina, for the Specialized e-bike donated by Gearheads in the OVCATA raffle draw on November 23. In the photo, from left: Margo and Mark Johnson of Gearheads, Norm, Brody and Katarina Mathurin, Ron Moss and Debbie Fiebig of OVCATA.

EGANVILLE: Active Transportation is alive and very well in the Ottawa Valley was the message that came through loud and clear at the annual meeting of OVCATA - the Ottawa Valley Cycling and Active Transportation Alliance on November 23 at the Eganville Legion. At the meeting, members heard that public and government interest and recognition is growing, the number of local people and visitors walking, riding and otherwise getting around on their own power is growing, and OVCATA is growing too.

Jennifer Murphy, Mayor of Bonnechere Valley Township and outgoing Warden of Renfrew County attended the meeting as a speaker and actively took part in all its discussions. So did Mark Johnson of Gearheads, the Petawawa cycling and sports store that donate the $5,000 e-bike to OVCATA this year that was raffled off at the meeting.

The winning ticket belonged to Norman Mathurin of Renfrew, whose daughter Katarina bought it for him for Father's Day.

She outlined the development of the County's Active Transportation Policy since 2014.

The first paved shoulders were installed on County Roads 26 and 51 in the Petawawa area in 2003.  As of the end of 2017, the County had hardened shoulders on 180 km of roadway and over 220 km by the end of 2019. "That represents approximately one quarter of the County 820 km road system."

She said the County has budgeted $150,000 each year for the last number of years for hard-shouldering, but that it is sometimes able to access special funding for to do more than that.

Ms. Murphy reported on recent developments with the Algonquin Trail (the former CP Rail line). "The trail is a great example of another project that along with partners has developed an award winning backbone for all kinds of Active Transportation activities," she said. Warden Murphy reported, with enthusiasm, on discussions with provincial cabinet ministers indicating that some of the funding budgeted for four-laning highway 17 will be used to improve the trail in order to get cyclists off Highway 17.

Ms. Murphy and the group discussed concerns that have arisen over motorized vehicles on the trail. Dirt bikes, she told the group, are prohibited. OVCATA members at the meeting agreed that without better public notice and enforcement of rules, the trail will deteriorate rapidly and become less attractive to visitors and local people.

Local municipalities can benefit greatly by embracing Active Transportation, Ms. Murphy said. She pointed to her township's new paving, with hardened shoulders, of the Fourth Chute  Road. "Active Transportation is probably the reason we got the grant (to pave the road)," she said.

At the meeting, OVCATA members reported on outreach they have been doing to local municipalities, encouraging the setup of committees on Active Transportation in each municipality. OVCATA members have been in contact, so far, with Petawawa, Renfrew, McNab-Braeside, North Algona Wilberforce, Bonnechere Valley, Killaloe Hagarty Richards, Madawaska Valley, Laurentian Valley and Whitewater Region and the City of Pembroke.

OVCATA members Ron Moss, Bob Peltzer and Andris Kalnins reported on plans for the new year, including promoting rider safety on the Algonquin Trail and at the Tour de Whitewater and helping organize the Tour de Bonnechere and other events. Treasurer Debbie Fiebig reported that the e-bike raffle raised $2,632 for the organization, which now has approximately $3,700 in the bank.