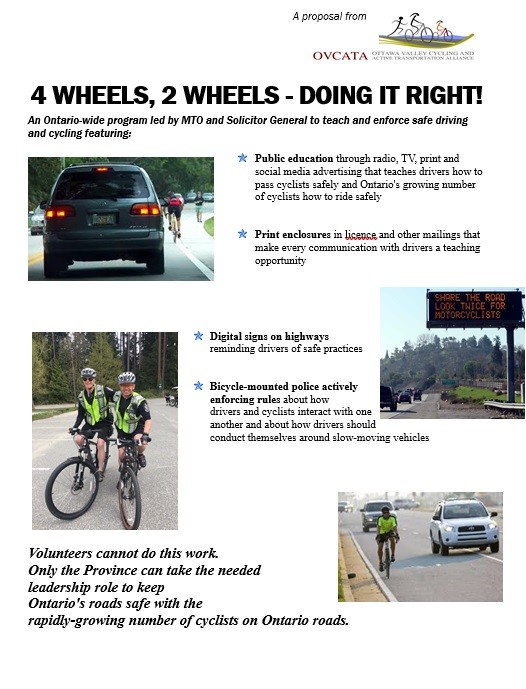 February 11, 2022: OVCATA has been working closely with our local MPP and Active Transportation organizations around Ontario to improve road safety education and enforcement.

Last summer OVCATA put together a proposal called "4 Wheels, 2 Wheels – Doing It Right" and brought it to Renfrew-Nipissing-Pembroke MPP John Yakabuski as well as circulating it to approximately 170 active transportation and cycling groups in the province. The proposal calls for a range of low-cost measures the provincial government could undertake to educate cyclists and drivers about how to share the road safely and for enforcement methods that could have a big impact with modest effort and expense.

Last September, OVCATA Board members Bob Peltzer and Ish Theilheimer met with Mr. Yakabuski, who endorsed the ideas in the proposal at the time and who expressed support for its principles in a Zoom meeting in February.

"There has been a huge increase in cycling activity in recent years, both because of the pandemic and because of the growing popularity of cycling," said Ish Theilheimer. "Unfortunately, most drivers are not educated in how to drive around cyclists and other slow-moving vehicles. And too many cyclists don't know how to behave on the road. Educating both groups, as well as school children, whose first vehicles are usually bikes, would be a big step toward a lot more road safety."

None of the proposals call for new legislation, but, with an election in the near future, Mr. Yakabuski, who has been an OVCATA member and supporter for years, cautioned that implementation may take more time than available in the current legislative session. He told OVCATA's representatives, however, that whoever forms the next government, if reelected, he will continue to support any measures that make roads safer for both cyclists and motorists. "The safety of every road user is the goal we all must pursue," said Mr. Yakabuski.

The main elements of OVCATA's proposal are

- Public education through radio, TV, print and social media advertising that teaches drivers how to pass cyclists safely and Ontario's growing number of cyclists how to ride safely;

- Print enclosures in licence and other mailings that make every communication with drivers a teaching opportunity;

"Getting police officers on bikes working with other officers in patrol cars would identify a lot of infractions," said Bob Peltzer. "And it would quickly send a message to the public that safety rules will be enforced."

OVCATA recommends that those who support these meaures contact Mr. Yakabuski at his office via email at john.yakabuskico@pc.ola.org