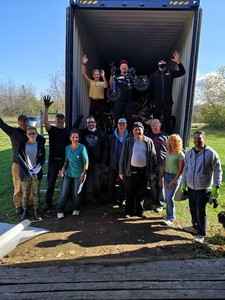 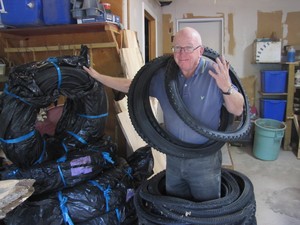 Carleton Place, ON: A large group of volunteers gathered by a nearby barn on a late October weekend to stuff 530 used bikes into two shipping containers bound for Cuba.

The shipment was the culmination of six months of effort by dozens of volunteers across Eastern Ontario. The project, called Cubacan Bikes, was  organized by Bill Ryan, who has made and donated thousands of baseball bats he has made to Cuba over the past decade and got to know people in government there.

Ryan, who lives near Carleton Place and was raised in Eganville and graduated from Opeongo High School, was impressed by the support he found for the project. "You go to your family, your friends and neighbors and they show up for Cuba." he said. "It is so satisfying to see so much support for people they don't know and will never meet."

The bikes were collected over the course of six months, despite the pandemic, from throughout Ottawa and eastern Ontario. In addition to Ryan, there was another Renfrew County  element to the story. OVCATA (Ottawa Valley Cycling and Active Transportation Alliance) actually got the ball rolling. I personally suggested doing it, and OVCATA steered more than 100 donated bikes from the Ottawa area to the project.

Word of the project spread through the news media and online, and Ryan found himself flooded with donations.

While Bill and his wife, Nora, travelled hours to and from and around Ottawa - up to 80 km away, another volunteer scoured Kingston - 120 km  in the other direction - and local rural areas. Donated bikes were brought to a barn belonging to a neighbour of Ryan's where they were prepared for shipping. Many needed refurbishing and new parts or tires, and all had their pedals and front tires removed and handlebars turned for shipping.

Meanwhile, Ryan looked high and low for a company that would provide containers and ship to Cuba, not easy during these times of supply chain disruption. He finally found a company that could supply and ship two containers. Total cost of shipping, parts and spare tires sent as part of the shipment was about $13,000, or about $25 per bike, with the bikes set to arrive in Cuba in late November. It might sound pricey, but it compares well with the cost of sending a small package to Cuba, which can be a lot more than $25. The estimated value of the donation was almost $118,000. Bike tires, alone, in Cuba can sell for up to $100 at this point. Ryan says dozens of people, including many bike donors, contributed to raise the total needed.

Once they arrive, they will be received, owned and distributed by the CDRs - neighbourhood watch/civil defence groups organized across Cuba by the government. The CDRs are headed up by Gerardo Hernandez, a member of Cuba's national assembly. Hernandez is a national hero in Cuba as a member of the "Cuban Five" - secret agents arrested and imprisoned in the US who had been working to stop terrorist threats against Cuba. Ryan made bats to commemorate "The Five" and got to know Hernandez while he was still serving time.

Ryan is pleased with the project but he says, "The one thing I learned was not to do it again. I got lucky finding the barn. If [barn owner] Rick hadn't helped, I would have been in big trouble.

"The one big advantage doing this project was that funding came much easier," he says.  In the past, he and his wife, Nora, raised most of the money themselves or paid out of pocket for donating bats and other items. "I should point out that none of the donations were used for expenses such as mileage to do pickups. The guys all donated their time and even the tools we used to get the job done."